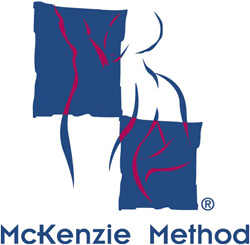 The McKenzie Method is a unique method used to assess and treat the spine. It is widely recommended as the first choice for common back and neck problems worldwide.

Most low back pain is “mechanical” in origin, meaning that an applied force caused the pain. A basic philosophy of McKenzie’s theory is that the reverse force can probably abolish the pain and restore function.

McKenzie credits the patient’s ability to learn the principles and empowers them to be in control of their own symptom management, which can reduce dependency on medical intervention. The McKenzie Method promotes the body’s potential to heal itself without medication, heat, cold, ultrasound, needles, surgery or a force dependent on the practitioner.

The McKenzie Method: 3 Steps to Success

Unique to the McKenzie Method is a comprehensive and logical step-by-step process to evaluate the patient’s problem quickly. This mechanical examination can “classify” most patient conditions by the level of pain or limitation that results from certain movements or positions. A McKenzie assessment can eliminate the need for expensive and/or invasive procedures.

Research has shown the initial McKenzie assessment procedures to be as reliable as costly diagnostic imaging (i.e., x-rays, MRIs) to determine the source of the problem and quickly identify responders and non-responders.

McKenzie treatment prescribes a series of individualized exercises. The emphasis is on active patient involvement, which minimizes the number of visits to the clinic.

Ultimately, most patients can successfully treat themselves when provided the necessary knowledge and tools. For patients with more difficult mechanical problems, a certified McKenzie clinician can provide advanced hands-on techniques until the patient can self-administer.

By learning how to self-treat the current problem, patients gain hands-on knowledge on how to minimize the risk of recurrence and to rapidly deal with recurrence if it occurs. The likelihood of problems persisting can more likely be prevented through self-maintenance.